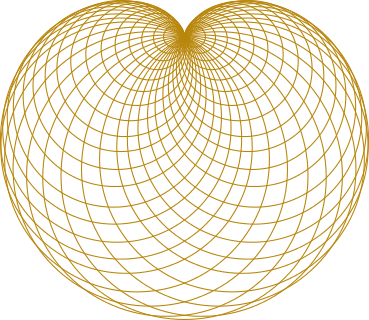 I made the above figure in Inkscape. A cardioid is the envelope formed by a set of circles whose centers lie on a circle and which pass through one common point in space. This image shows the circle on which the centers of the circles in the above image lie. A cardioid is also the path traced by a point on a circle which is rolling along the surface of another circle when both circles have the same radius (here is a cool animation of that).

What is the cardioid’s significance? Well, it looks like a heart, which is kind of cool. It’s also the (2D) pickup pattern of certain microphones (I have a USB cardioid microphone). If a sound is produced at a given point in space, the pickup pattern shows an equal intensity curve. So, if I place a microphone at the intersection point of all those circles, the outside boundary is where a speaker producing, say, a 440 Hz tone would have to be to be heard at a given intensity. So, the best place to put it would be on the side where the curve is most round (the bottom in this picture) without being too far away from the microphone.

. Here’s what I mean; in polar coordinates, the equation of the above cardioid is given by

where a is a scaling factor, and theta is the angle relative to the positive x-axis. The origin is at the intersection of the circles. The equation of a parabola opening upwards and whose focus is at the origin in polar coordinates is just

which is an inversion of the cardioid equation through

, or the unit circle.