This is where the complex numbers come in. Suppose I define a new number, let’s call it i, where

This is interesting, but what is the magnitude of

Now that we have defined this new unit, i, we can now create a new set of numbers called the complex numbers, which take the form

and we can make complex numbers with real and imaginary parts, like 3 + 4i.

How do we plot complex numbers? Well, complex numbers have a real part and an imaginary part, so the best way to do this is to create a graph where the abscissa (x-value) is the real part of the number and the ordinate (y-axis) is the imaginary part. This is known as the complex plane. For instance, 3 + 4i would have its coordinate be (3,4) in this coordinate system. 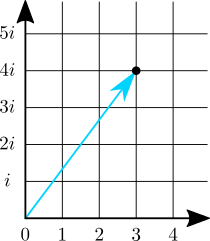 We can think of points on the complex plane being represented by a vector which points from the origin to the point in question. The magnitude of this vector is given by the absolute value of the point, which we can denote as r. The x-value of this vector is given by the magnitude multiplied by the cosine of the angle made by the vector with the positive part of the real axis. This angle we can denote as

. So, we get that our complex number, z, can be written as

The Swiss mathematician Leonhard Euler discovered a special identity relating to this equation, known now as Euler’s Formula, that reads as follows:

Where e is the base of the natural logarithm. So, we can then write our complex number as

What is the significance of this? Well, for one, you can derive one of the most beautiful equations in mathematics, known as Euler’s Identity:

This equation contains the most important constants in mathematics: e, Euler’s number, the base of the natural logarithm; i, the imaginary unit which I’ve spent this whole time blabbing about;

, the irrational ratio of a circle’s circumference to its radius, which appears all over the place in trigonometry; 1, the real unit and multiplicative identity; and 0, the additive identity.

So, what bearing does this have in real life? A lot. Imaginary and complex numbers are used in solving many differential equations that model real physical situations, such as waves propagating through a medium, wave functions in quantum mechanics, electromagnetic phenomena, and fractals, which in and of themselves have a wide range of real life application.

1 thought on “Equation of the Day #1: Complex Numbers”